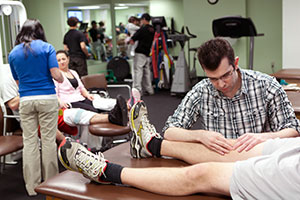 If the damage to the knee, and the arthritis is confined to just one part of the knee, the joint replacement surgeon may recommend a partial knee replacement for the purpose of sparing the most bone as possible during surgery.

In fact, bone sparing is the main objective of all modern knee and hip replacement surgery. The more natural bone that can be preserved during joint replacement, the better.

Knee replacement with an artificial joint

Osteoarthritis is the most common reason for replacing an arthritic knee with an artificial knee joint.

Knee replacement surgery was first performed in 1968. Over the past 50 years, the procedure has greatly improved the lives of patients, enabling patients to walk and plays sports again without the limitation of pain symptoms.

Over 10 years to 2009, total knee replacement increased by 84% in the American population. Ironically, it’s not the elderly driving the large increase in knee replacement surgery. The increase is coming from younger and middle-age Americans that have lost control of their weight, and their obesity has destroyed their knees.

Who is a candidate for an artificial knee joint?

Total knee replacement is reserved for the patient who has not benefited from conservative treatments and whose quality of life is suffering due to the debilitation caused by knee pain. Examples include those experiencing pain at night and those who cannot perform their normal, everyday activities.

Typically knee replacement is reserved for those who are over 60 years of age who are in relatively good health. That’s because the lifespan of an artificial joint is estimated to last 15 to 20 years. The goal is to have the artificial joint outlive the person.

Many times that is simply not possible because more people can benefit from joint replacement while in their 40s and 50s. This ultimately can require a complex revision surgery when the person is in their 60s or 70s when other health issues may be a complicating factor to a second surgery and a longer recovery.

Active knee replacement candidates will find it comforting to know that they will be able to resume some athletics following surgery such as golf, swimming, and walking. Some knee replacement recipients have even continued to play tennis and snow ski. Unfortunately, a knee prosthesis is not quite as effective as a healthy, natural knee, however it will be a great improvement over the preoperative pain and discomfort.

Who is not a candidate for artificial knee surgery?

As mentioned before, to receive knee replacement surgery, you must be a good candidate. If not, surgery could prove counterproductive.

For some, knee replacement surgery is not in their best interest. Those who are too young (except for those who suffer from severe rheumatoid arthritis) should consider other types of treatment for knee pain, since after 15 or 20 years, the prosthesis will need to be replaced.

Unfortunately, the bone will need to be cut short to make room for a new prosthesis, and function and mobility is likely to be damaged during the second operation.

How is artificial knee replacement performed?

During knee replacement surgery, you will be under general anesthesia meaning you will be asleep and without pain during the entire procedure, which usually lasts a few hours.

The knee is opened up and the kneecap is moved out of the way. Doctors then, shave off the bottom of the femur and the top of the tibia and fibula bones. The prosthesis is then glued to the bones with special, surgical cement. The knee is then sutured back together and drainage tubes are used to prevent clogging.

Usually, a hospital stay for knee replacement surgery lasts between four and five days. During your time at the hospital, your leg will be attached to a device called Continual Passive Movement (CPM), which will move your knee to prevent stiffness. After the hospital stay, the patient will probably require the aid of a walker for a few days before putting full weight on the leg. Overall, full recovery can take anywhere from two months to one year although dramatic improvements should be seen sooner than that.

The new robotic technology for joint replacement comes at an ideal time. With the aging baby boomers hitting their 60s and 70s, experts anticipate a 673% increase in knee replacements and a 174% increase in hip replacements over the next 10 years.